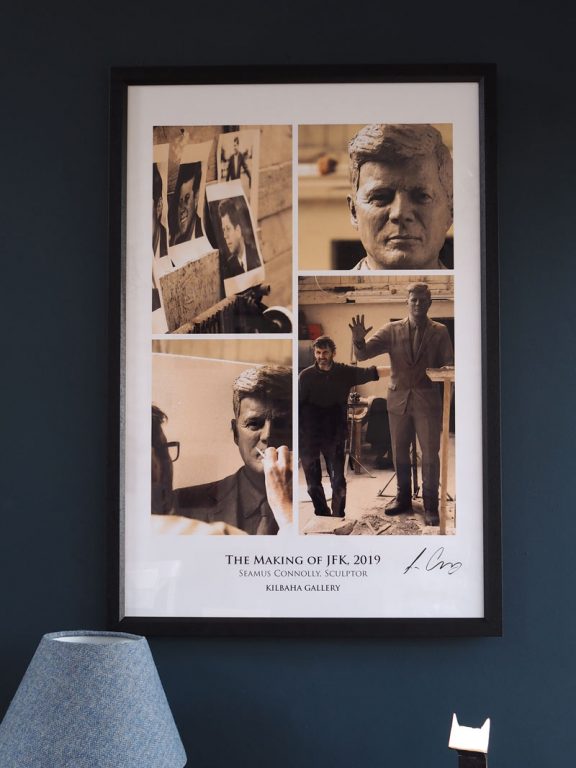 An exciting opportunity to own a collectable Art Poster
To Note:  (a) Posters are un-framed and in tubes (b) Posters are large at 24″ x 36″ (standard sizes)

These posters are individually signed by the artist and gallery stamped for authentication.

Limited-Edition, Art Posters are an exciting way to grow and add further interesting elements to your personal art collection – (and they are brilliant for placing in trickier to decorate areas such as your home office or Den, or along the walls of corridors). A poster is generally a window to your cultural interests, places you’ve travelled, shows you may have attended, or simply things you are passionate about – and people love to enquire about a framed poster’s significance to you.

Art Collectors quite regularly seek out limited edition ART POSTERS at auctions and sales, but especially ones with unique provenance, just like this one.

This poster will clearly appeal to fans of the late US President, John F Kennedy, as it offers you a sneak peak into the process used by sculptor, Seamus Connolly, to create this commemorative masterpiece, which now stands proudly in bronze, in JFK’s ancestral home of Bruff, Co. Limerick. Because it is both individually signed and gallery authenticated it is likely to become quite the collectable item.

About The Statue:
This life-size bronze statue of the former US President John F Kennedy, was unveiled in 2019, in the home of his ancestors, Bruff, Co. Limerick. The statue was sculpted in clay over many months, by renowned Irish sculptor Seamus Connolly and also cast in bronze in his studios in Kilbaha, Co. Clare. This bronze statue now stands proudly outside the Thomas Fitzgerald Museum, in Bruff, Co. Limerick.

Seamus Connolly, is one of Ireland’s LEADING portrait sculptors. This poster offers a rare glimpse into his studio while a piece like this is being created.

Connolly is part of an artistically renowned family.  A second-generation sculptor, he built up his own bronze foundry, with his dad, sculptor, Jim Connolly. Seamus himself is one of Ireland’s leading, much admired, portrait sculptors.  Much of his work consists of commemorative, life-size bronze statues, erected in various locations around Ireland. Seamus is most famous for this, his Co. Limerick statue of the late US President, John F Kennedy, (seen here) but also, for his Páidí Ó Sé statue in Ventry, Co. Kerry, his statue of a young Richard Harris in Kilkee, Co. Clare, his statue of Irish playwright John B Keane, his statue of Limerick hurler Mick Mackey, his bronze bust in Thomond Park of Anthony ‘Axel’ Foley and indeed many more.

This poster has previously unseen images of this artist at work, sculpting in clay, the much loved John F Kennedy statue, Bruff.

The History:
John Fitzgerald Kennedy’s great-grandfather, Thomas Fitzgerald, emigrated from Bruff to Boston in 1852 – like so many others after the devastation of the Great Famine. Thomas’s son and JFK’s grandfather, John ‘Honey’ Fitzgerald, who became known as ‘Honey Fitz’, went on to become the first Irish Catholic Mayor of Boston. He served for several terms, beginning the long political legacy of the Fitzgerald and Kennedy families. Honey Fitz married Mary Ann Hannon, whose parents were also both from Bruff. Their daughter Rose married Joe Kennedy from New Ross – they had nine children – of which JFK was the second. The Bruff bible that Thomas Fitzgerald had brought with him to the USA, was the very one used by his great grandson, JFK, when he was inaugurated as US President in January 1961.