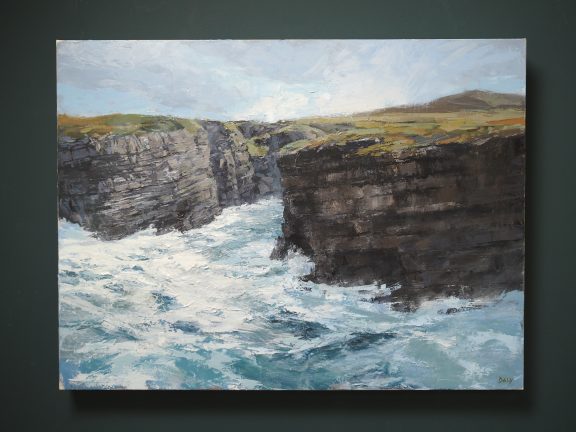 There is nothing as mesmerising as an angry sea; crashing, rolling and louder than anything you can imagine. The cliffs at the North of the Loop Head Peninsula are on the Atlantic Ocean and are no stranger to such seas. This is a gorgeous oil on canvas depiction called ‘Indent, Loop Head’ – the handling of the waves, white with ferocious movement, and the scale and depth of the swell of the ocean alongside those cliffs is so impressive and true to life. Ivan’s work is incredible.

With bold, confident and expressive compositions, featuring, seascapes and rocks, Ivan manages to deftly capture the movement, depth and the boundless energy of the Atlantic ocean, as well as the strength and longevity of the rocks. He really wants people to connect deeply to that specific moment in time; that beautiful instant, where he stood, inhaling that powerful energy. He wants people to sense and feel what he experienced when walking and hiking these magnificent coastlines.
With work hanging in collections around Ireland and internationally, Ivan’s deliberate strokes, handling of oils, and ability to capture the coastline as he does, has become rather sought after.