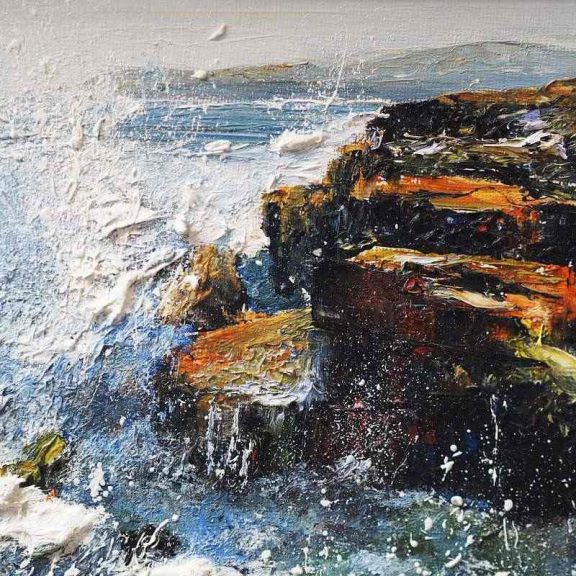 The power of the Atlantic Ocean, is something that many artists attempt to recreate in their work but the vigour of which, few can capture like Mark Eldred. Here is a typical scene on the coast of Inis Mor, the biggest of the three Aran Islands of the waves crashing against the coastline. A small piece but full of action and personality, this painting would make an incredible, rather dramatic, addition to a collection or to a well thought out space including an office or study space and is helped in this respect by its majestic framing.

For uninsured shipping, (or shipping insured to the value of €100) we use the postal service here in Ireland, called An Post. It is very reliable and we take the utmost care in packing all our pieces to ensure that have the very best chance of arriving safely in their destination. Please note that this option would be at your own risk.

However, as we are aware, accidents can happen and so, taking into account the delicate nature and cost of your purchase, if you would prefer it travel in a specialized and insured Art Box with an Art Handler, then this can be arranged.

For paintings or items falling outside of those dimensions then a further discussion is required – as it may need to have a bespoke crate to be built for it.

All enquiries can be directed to kilbahagallery@gmail.com