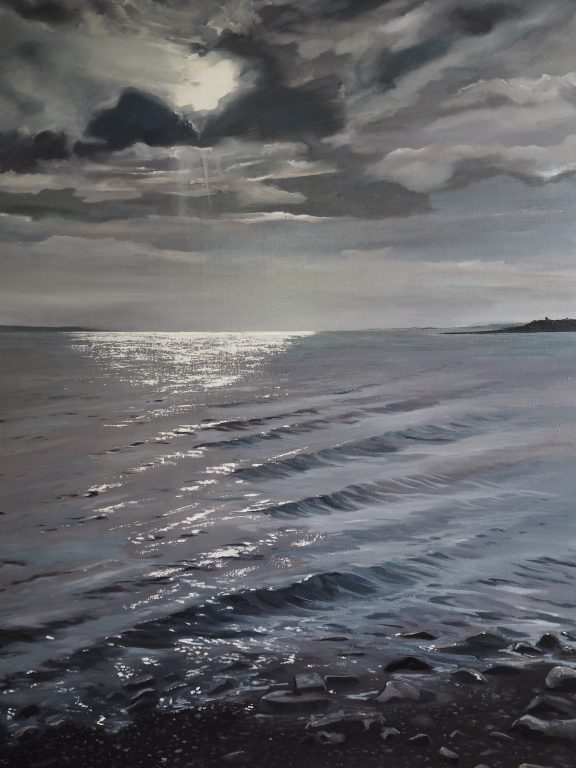 Another gorgeous original work by the ‘fast-becoming-uber-collectable’, West Clare artist, signing their work only as the letter  ‘D’.  Here, they have produced a striking, large, oil on canvas painting, of a specific and very special place, just outside the town of Kilrush, called Brew’s Bridge. This stunning piece is unframed – and acts rather like a window to heaven – with the stunning sky and the light glinting across the ripples in the tide. The artist has also penned a few words as to why it is particularly special for them –

In the artists words .. “Brew’s Bridge, was a favourite beach visit for us. Just outside Kilrush, it was stony when the tide was in, and once the tide went out you could run on the sandy (if slightly muddy) beach for hours. It was such a safe beach for children and a favourite with the mammies as they wouldn’t see us kids until we were hungry, and they had great peace. Such wonderful memories of sandwiches, and large flasks of diluted orange, and sunburn too of course. The walk to brews bridge was endless for little legs, but the excitement as you got nearer and could see the sun sparkling on the water, was immense… and then you’d run as quick as you could to be first in for a swim.  We stayed all day, as it was such a long walk back, unless we were lucky enough to get a lift home.
A peaceful place to sit and think in later years, this painting is set in the late afternoon with a lovely sparkle falling on the water to remind of happy days gone by”  ‘D’